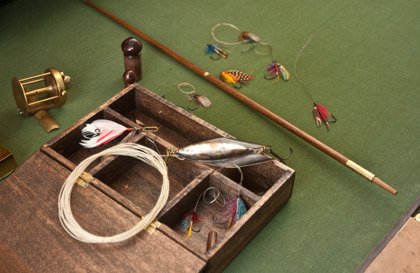 The story below was shared by John Cooney, whose father Patrick was the farm foreman at Lindenwald for ten years beginning in 1841.

Returning from one of his trips to New York the President brought with him a splendid fishing rod, which was said to have cost ten dollars, in those days an enormous price for a fishing rod. To be able to boast that I had caught a fish with the president's wonderful new fishing rod became at once the greatest object in my life. Eagerly I accompanied him on the next fishing trip. On the road we passed an enormous turtle and the president with the almost childish curiosity which was one of his characteristics, amused himself by poking the reptile with the end of the pole, a proceeding which the turtle resented by grabbing it and proceeding calmly on its way.

"Johnny! Why, Johnny!" gasped the old man, as he tugged at it ineffectually. "Why - he has my new rod. What shall we do to make him let it go?"

We exhausted all expedients, but it was no use. Let go, the turtle would not, not even for an ex-president of the United States.

"Well," I concluded, "there are only two things we can do: Cut off the turtle's head, or cut off the end of the rod."

And for over an hour we followed his turtleship, one end of the rod in the turtle's mouth, the other in the president's hand, the latter fretting and fuming, but unable to make up his mind whether to sacrifice the rod or the turtle. Finally I strongly advised killing the turtle, but Mr. Van Buren again objected.

"No, Johnny, we can't kill the poor thing. Cut off the rod as close as you can."

In vain I protested, but Mr. Van Buren's mind was made up and the ten-dollar fishing-rod sacrificed to save the turtle's life.

With about six inches of the rod still uptilted aggressively in his mouth the creature waddled on down the road, with a triumphant air. Amused at the ludicrous sight, Mr. Van Buren sat down on a stone by the roadside and laughed heartily.

"Look at him, Johnny. Why, he looks like a drunken sailor smoking a cigar."

"My recollections of Ex-President Martin Van Buren and his friends," John Cooney, Journal of the California Historical Society, 1914.